Where Are KTM Motorcycles Made? (Answered!) Where Are KTM Motorcycles Made? KTM Motorcycles are an Austrian manufacturer of off-road and sports motorcycles, headquartered in Mattighofen. The company was established in 1934 by engineer Hans Trunkenpolz, and the first production model was released in 1953.

KTM is one of the most popular motorcycle brands in the world. Founded in 1934 in Austria, KTM has become a leader in the off-road and street bike markets, producing some of the highest quality and most reliable motorcycles on the market.

With its European roots, many people wonder where KTM motorcycles are made. The answer is both simple and complex, as KTM has factories in a variety of countries around the world.

From Austria to India to China, KTM produces its motorcycles in many locations to ensure that customers around the world have access to its products.

In this article, we’ll explore the various countries where KTM motorcycles are made and the reasons behind this global production strategy.

What Does KTM Stand For?

KTM stands for Kraftfahrzeuge Trunkenpolz Mattighofen, which is the company that produces KTM motorcycles. Founded in Austria in 1934, KTM has grown to become one of the leading producers of off-road and street bikes, with production facilities located in Austria, India, and Thailand.

With a strong commitment to innovation, quality and performance, KTM motorcycles are a popular choice among motorcyclists around the world.

Where Are KTM Motorcycles Made?

KTM AG (Kronreif & Trunkenpolz Mattighofen), an Austrian company owned by Pierer Mobility AG and Indian manufacturer Bajaj Auto, is a conglomerate that has its lineage interlinking all the way back to 1934 with its parent entity being KTM AG, a conglomeration of various motorcycle brands.

In India and Indonesia, KTM has partnered with Bajaj Auto to produce motorcycles at their respective factories.

In China, KTM has partnered with CF Moto to produce their models. Finally, in the United States, KTM produces its motorcycles at a facility located in Murrieta, California.

Where Are KTM Manufacturing Plants Located?

KTM is an Austrian motorcycle manufacturer founded in 1934. The company is headquartered in Mattighofen, Austria, and has production facilities in the country as well as India, Indonesia, and Thailand.

KTM produces a range of off-road and sports motorcycles, including enduro, motocross, supermoto, and street models. They have been successful in international competition across many disciplines, including motocross and enduro racing.

KTM is one of the most successful motorcycle manufacturers in the world and is known for their quality products.

It Originated In Austria:

KTM Motorcycles are one of the most recognizable and popular motorcycle brands in the world. Founded in 1934 by engineer Hans Trunkenpolz, KTM began as a metalworking shop in Austria before becoming a full-fledged motorcycle manufacturer in 1953.

To this day, KTM motorcycles are still manufactured in Austria with the majority of them being made at the main factory in Mattighofen.

The company also produces bikes in India and China. KTM has become a worldwide sensation and is continuing to grow its presence in the motorcycle market.

The company now known as KTM began as a metalworking shop in 1934, founded by Hans Trunkenpolz in Mattighofen, Austria.

During the 1950’s, Trunkenpolz began producing motorized bikes, eventually leading to the production of the first KTM motorcycle in 1953. To this day, KTM has remained true to its roots, still producing all of its motorcycles in Mattighofen.

KTM has since grown to become one of the most successful motorcycle manufacturers in the world, exporting their bikes to over 120 countries worldwide.

John Penton is credited with bringing the KTM brand to the United States in the 1960s. He saw the potential in the Austrian-made motorcycles and began importing them to the US.

His efforts paid off, and KTM has since become one of the most popular motorcycle brands in the world. Today, KTM continues to produce their motorcycles in Austria, with production facilities located in Mattighofen and Munderfing.

The company also operates two subsidiaries in India and China that produce parts for KTM motorcycles.

Certain KTM Models Will be Made in China:

KTM, the Austrian motorcycle manufacturer, has announced that certain models of their motorcycles will now be manufactured in China. This new collaboration with Chinese company CFMoto will see production of KTM’s mid-range and entry-level bikes taking place at a new plant in China.

It is expected that this new partnership will help to increase production capacity and reduce costs, thus allowing KTM to better serve their customers around the world.

KTM is back and better than ever as the renowned Austrian motorcycle company continues to produce some of the most reliable and thrilling bikes on the market.

Their production facility has been reborn in Mattighofen, Austria and is now responsible for the creation of a variety of KTM motorcycles. The facility utilizes innovative technology and hand-crafted expertise to ensure that each bike is crafted with the utmost precision and quality.

With this new production method, customers can expect to get a KTM that is built to last and delivers a perfect balance between performance and comfort.

Is KTM Owned By Kawasaki?

KTM is an independent company and is not owned by Kawasaki. The company has production facilities in Austria, India, and China, and its bikes are sold in over 120 countries worldwide.

KTM motorcycle engines are made in Austria at the Mattighofen plant and use a combination of modern technology and traditional craftsmanship to ensure quality and performance.

KTM’s engines are designed to be lightweight and powerful, giving riders an edge on the racetrack.

KTM’s commitment to innovation has allowed them to stay ahead of the competition, making them a leader in the motorcycle industry.

Does KTM Make Their Own Engines?

Though the company has produced its own engines since the 1950s, KTM now relies on external providers such as Bosch, Rotax, and Pankl to manufacture their engines. KTM engines are designed in Austria, but manufactured primarily in Austria and Germany.

Is KTM American Made?

KTM motorcycles are not American-made. The brand is based in Austria, with production facilities located in Mattighofen, Austria and its assembly line in Manesar, India.

KTM motorcycles are marketed and sold in more than 130 countries worldwide, with their most popular markets being Europe, Australia and the Americas.

Although the company is based outside of the United States, KTM has a strong presence in America through its extensive dealer network.

Final Talk: Where Are KTM Motorcycles Made?

Where Are KTM Motorcycles Made? KTM motorcycles have proven to be a reliable and powerful brand of motorcycles. They are made in Austria, but their reach is far beyond the country’s borders. KTM bikes are available for purchase all over the world, from the United States to India.

KTM also has many different types of models that cater to all kinds of riders, from beginner-level models up to professional-level machines.

These features make KTM one of the most sought after motorcycle brands on the market today. 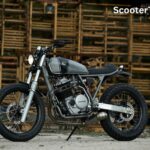 What Is A Thumper Motorcycle? (Facts You Need To Know!)